This article is a transcript of my talk "Launch Windows - How is Matthias Maurer going to join Thomas Pesquet's Halloween party?" given on the 2021-11-03 at PTS on our weekly "PTS lunch & learn" event. The source of the slides are available on my Github. 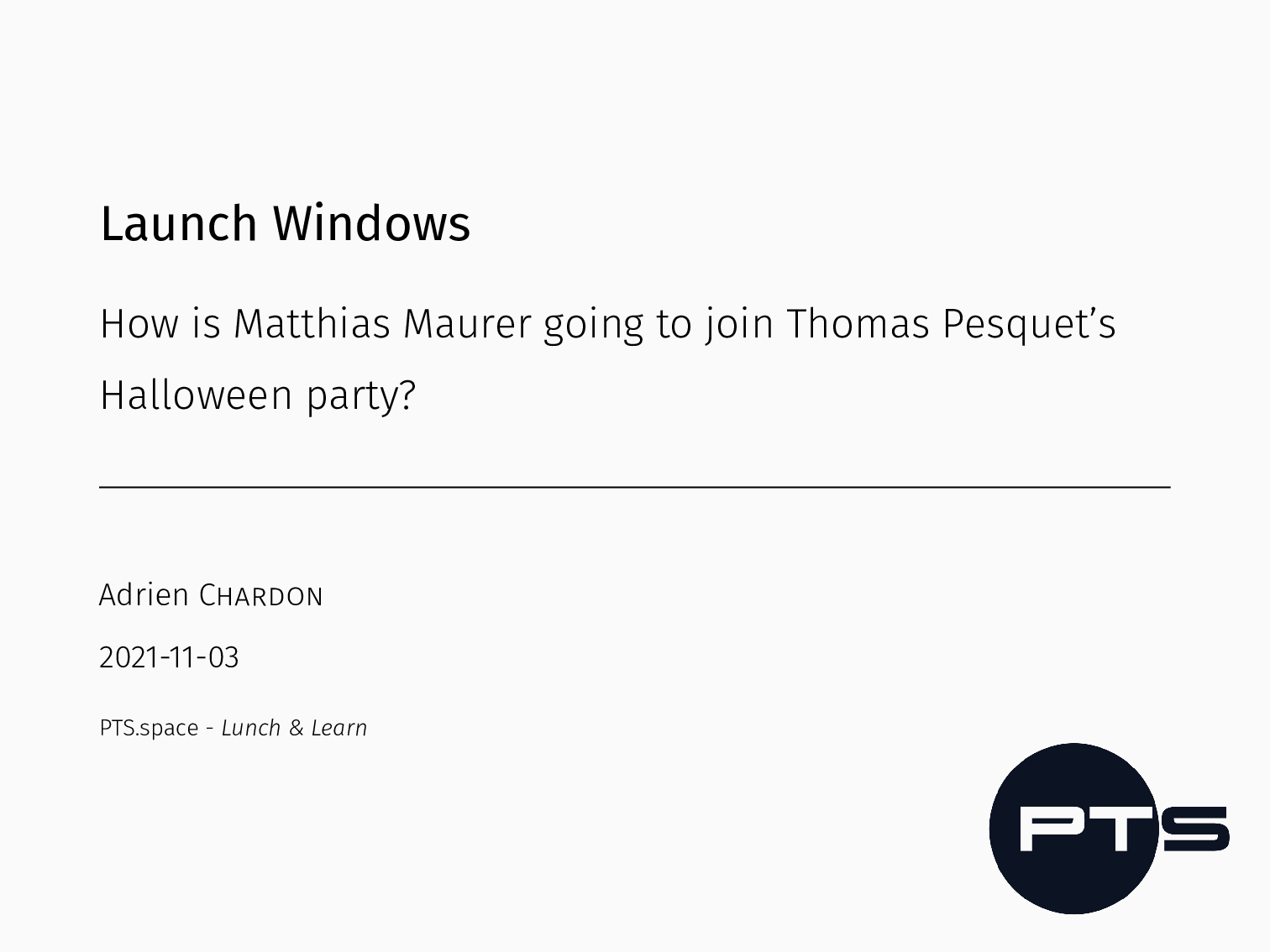 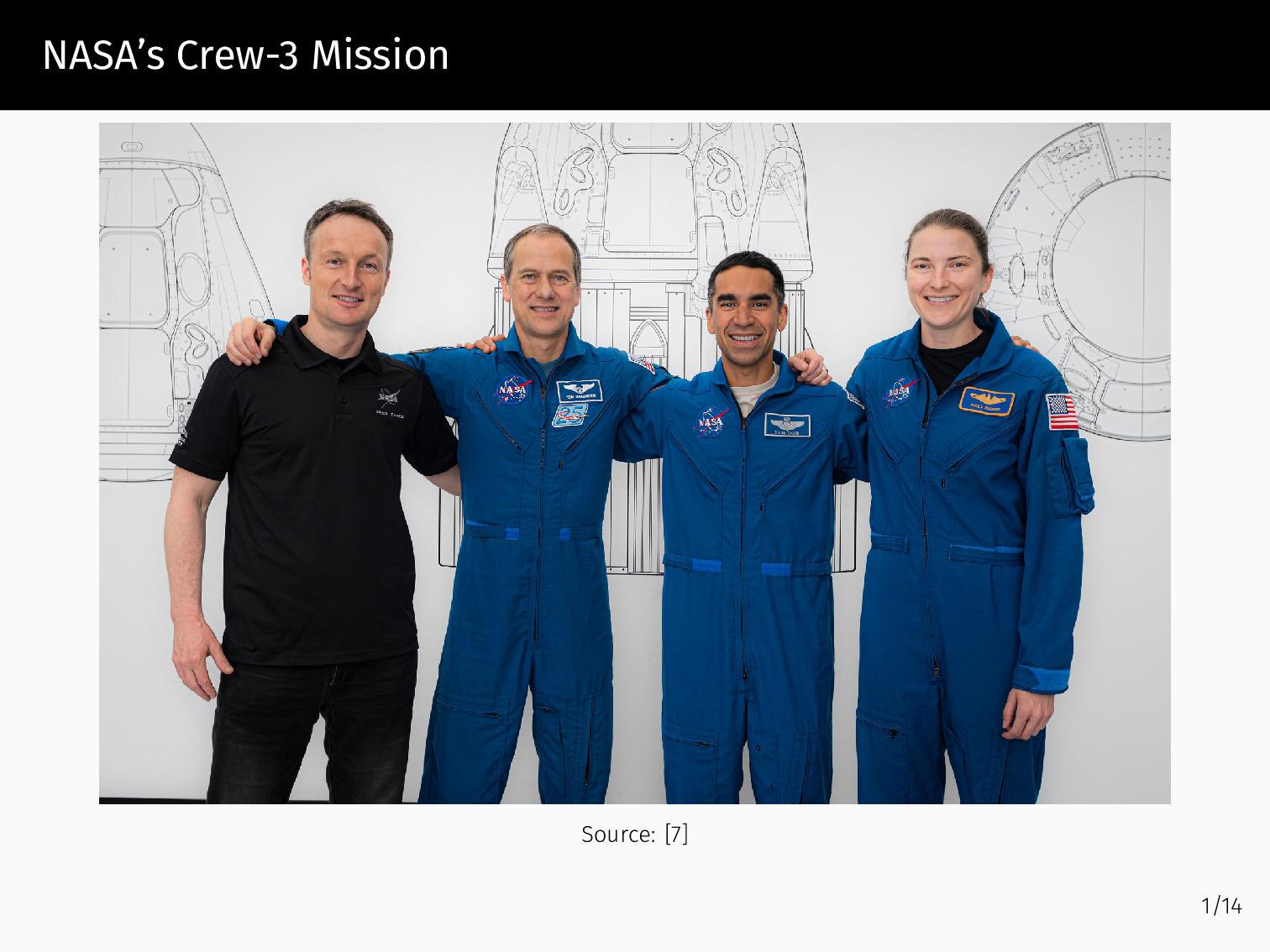 The leftmost person is Matthias Maurer. He is a German astronaut, and joined the ESA astronaut corp in 2015. After a few delays, Crew-3 finally launched to the ISS on the 2021-11-10. 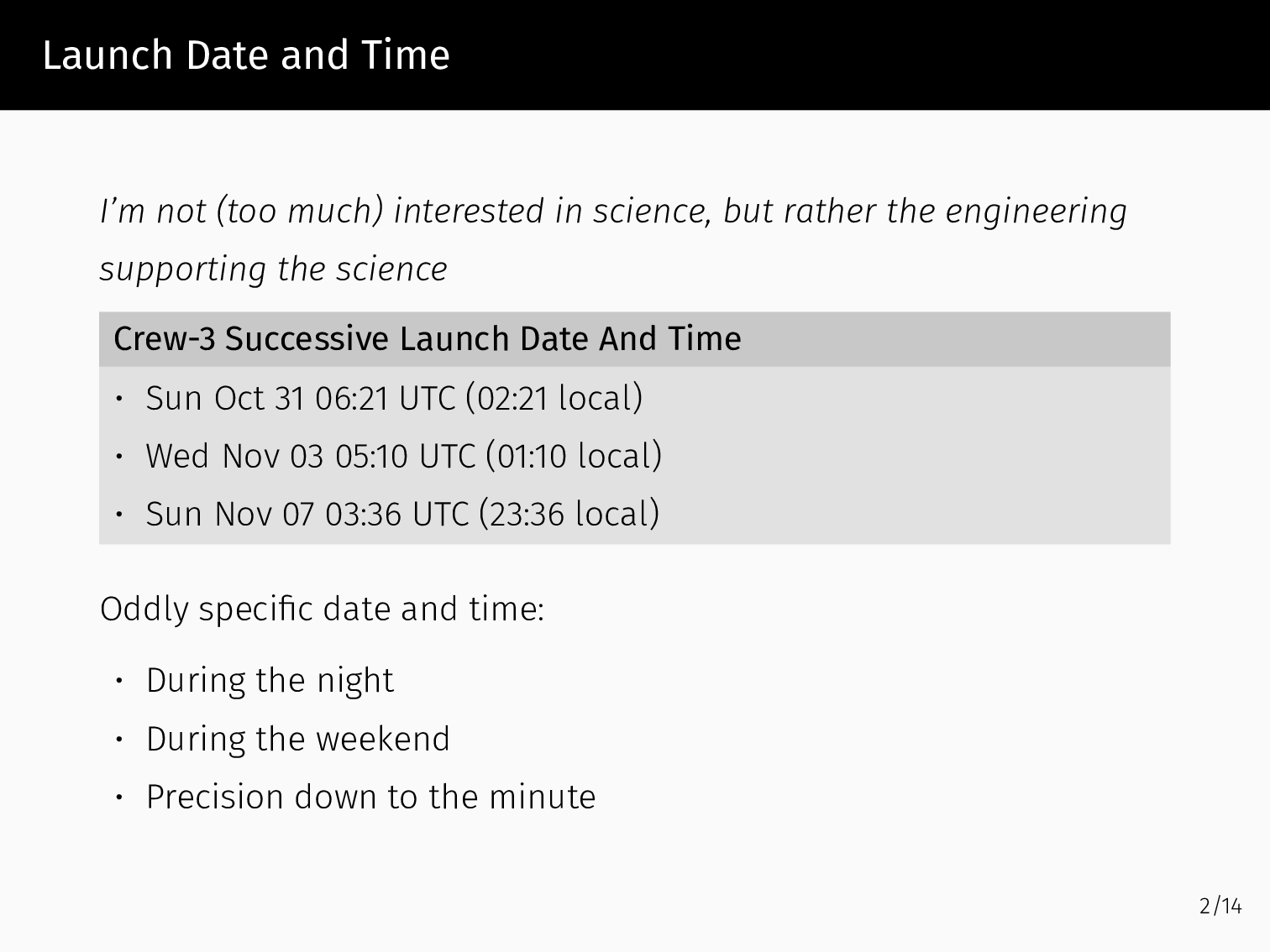 Matthias’s next 6 months will involve mostly science, some 10 hours per days, 6 days a week. That’s actually the most important part, and what we should talk about. But as an engineer, I am not (too much) interested in science, but rather in the engineering supporting the science. I am happy to work on engineering problems, and give scientists nice data they can later analyze.

That’s why I wanted to use Crew-3 opportunity to talk a bit about rocket science, in this case, launch windows.

When looking at the successive launch datetimes (pushed back due to a combination of bad weather and minor health issue), one can notice that they are very specific and not random at all: all the launch datetimes are precise to the minute (even seconds for some launches), and are scheduled during the night, sometimes during the weekend. People usually prefer to be either in their bed or in a club a Saturday at 1 AM!

There must be a reason for these launch datetimes… Let’s find out together! 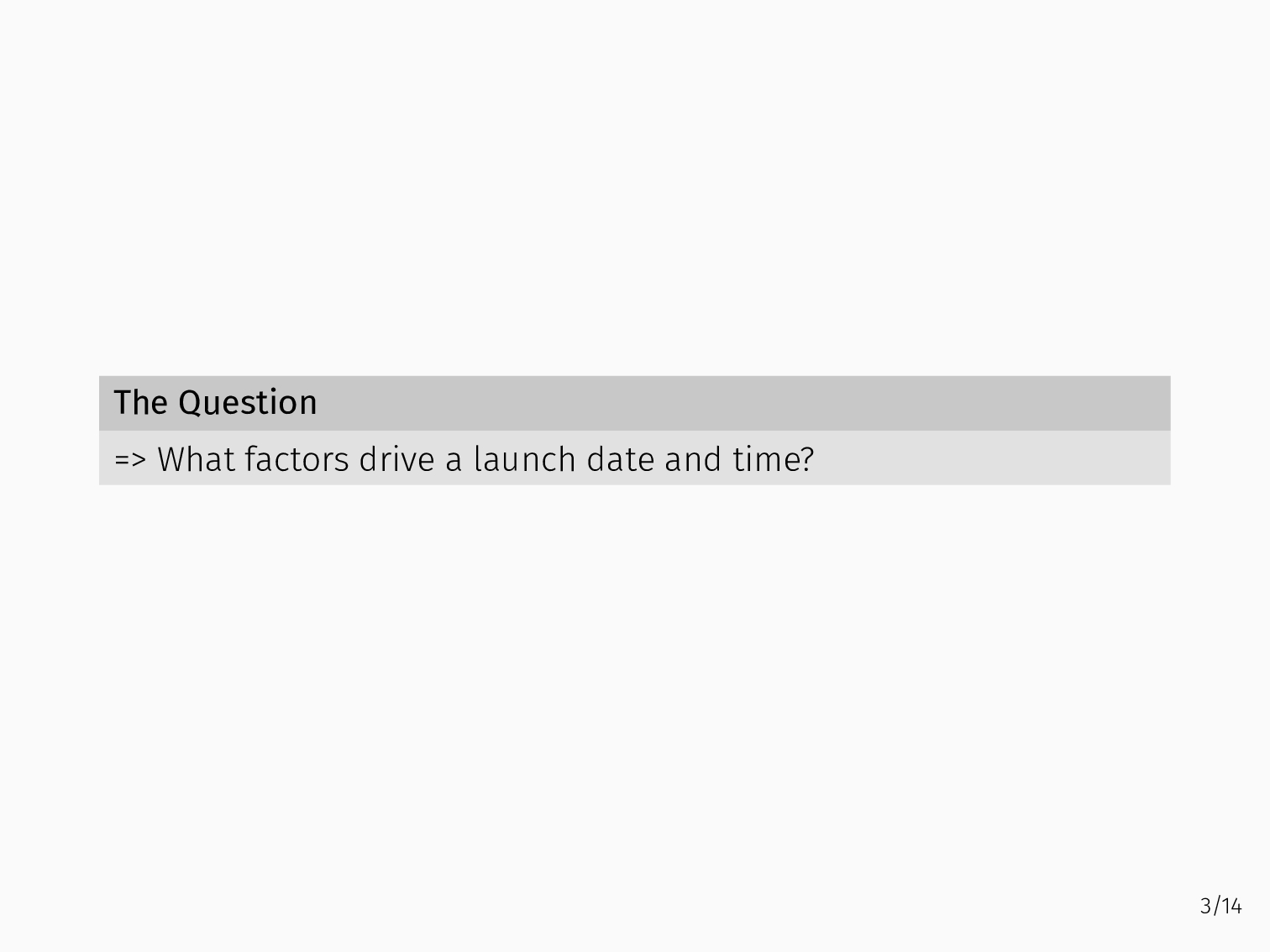 This leads us to the question I will try to answer in this talk: what are the factors driving a launch date and time? 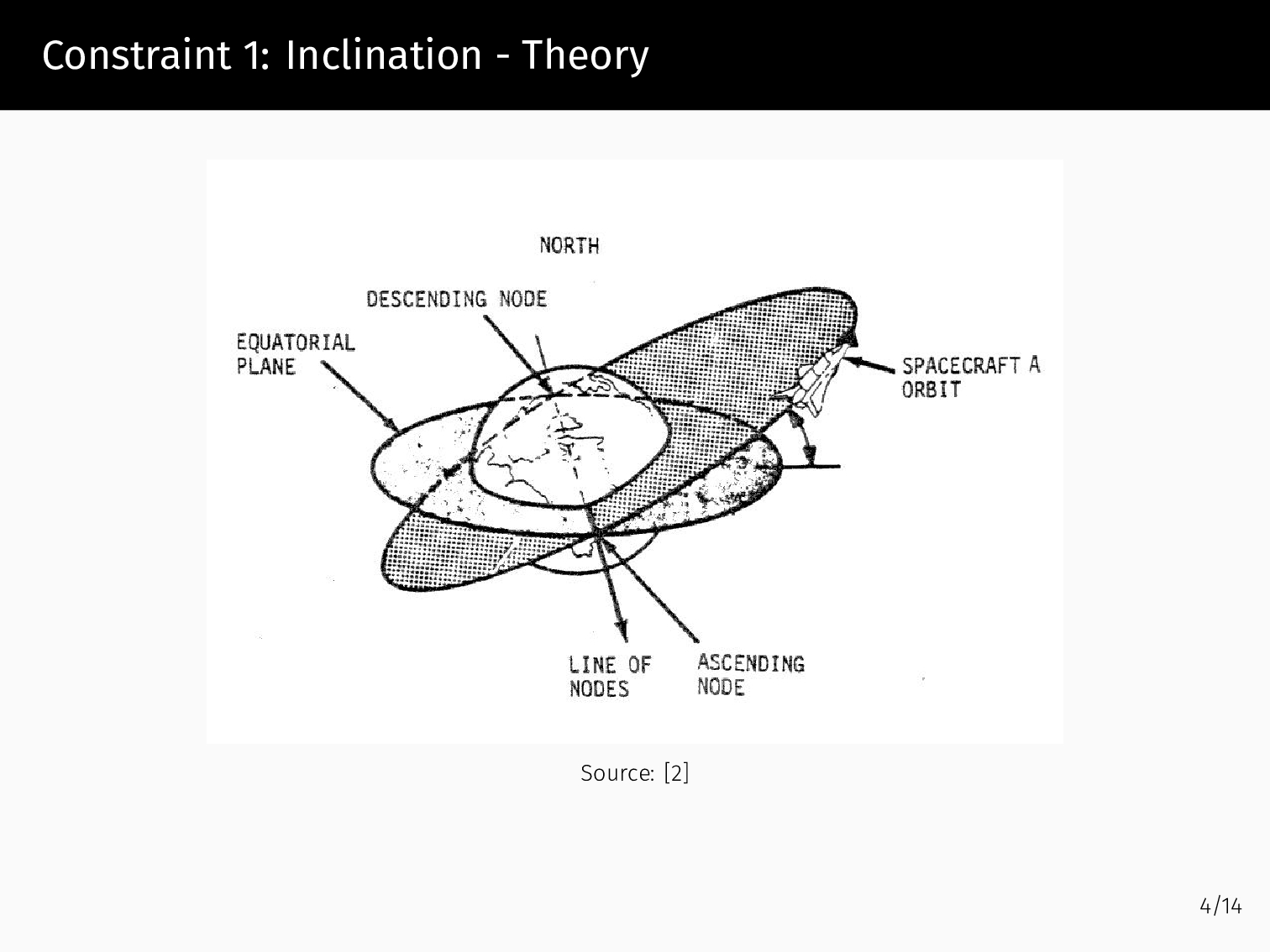 The first constraint to consider is related to the orbital plane.

Note: for best effect, this talk should be delivered with a grapefruit - or any large, round fruit - and a piece of paper to showcase what an orbital plane is.

The diagram on the slide shows the equator plane and an orbital plane, as well as these two points/lines were they both intersect. In this case (equator plane), these two nodes are called ascending node and descending node. 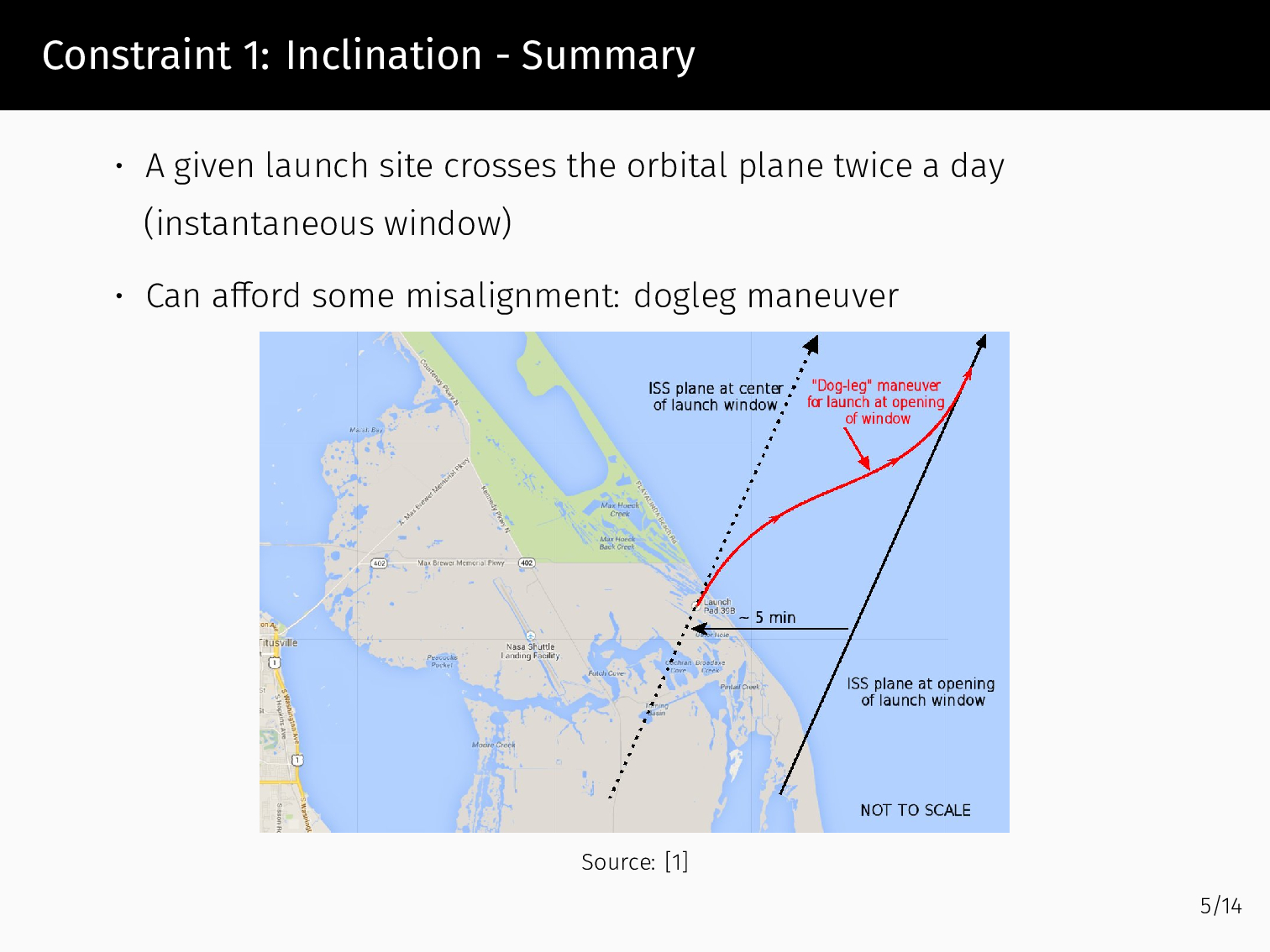 Eventhough the two intersecting nodes are instantaneous events, a rocket launching can afford some misalignment and correct it during launch: this maneuver is called dogleg and allows for non instantaneous launch windows. This can be very useful to troubleshoot any last minute issue that could arise and still be able to launch without waiting for the next window.

Most of the rockets launching from the east coast of the USA (Space Shuttle, Atlas V, Falcon 9, …) have a dogleg capability, which they use from time to time for specific missions. 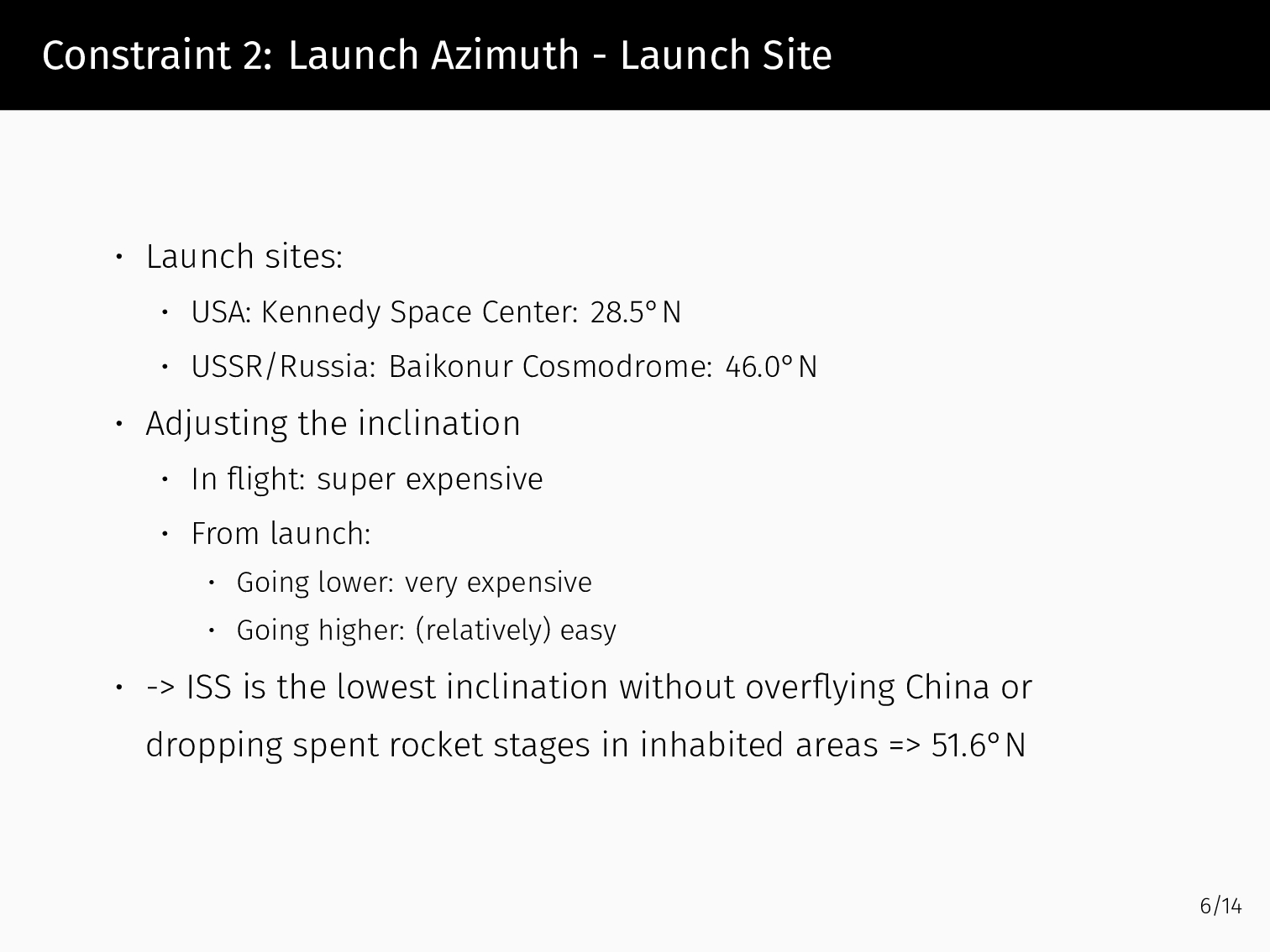 The second constraint is the range of inclinations that can be reached from the launch site. This depends on the latitude of said launch site, as well as the range constraints.

The Kennedy Space Center is at an inclination of 28 degrees, and the Baikonur Cosmodrome at 46 degrees. The ISS is at 51 degrees, which does make sense when considering two facts:

51 degrees is therefore the most easily reachable inclination for both the USA and Russia which allows them to remain in good terms with their neighbors. 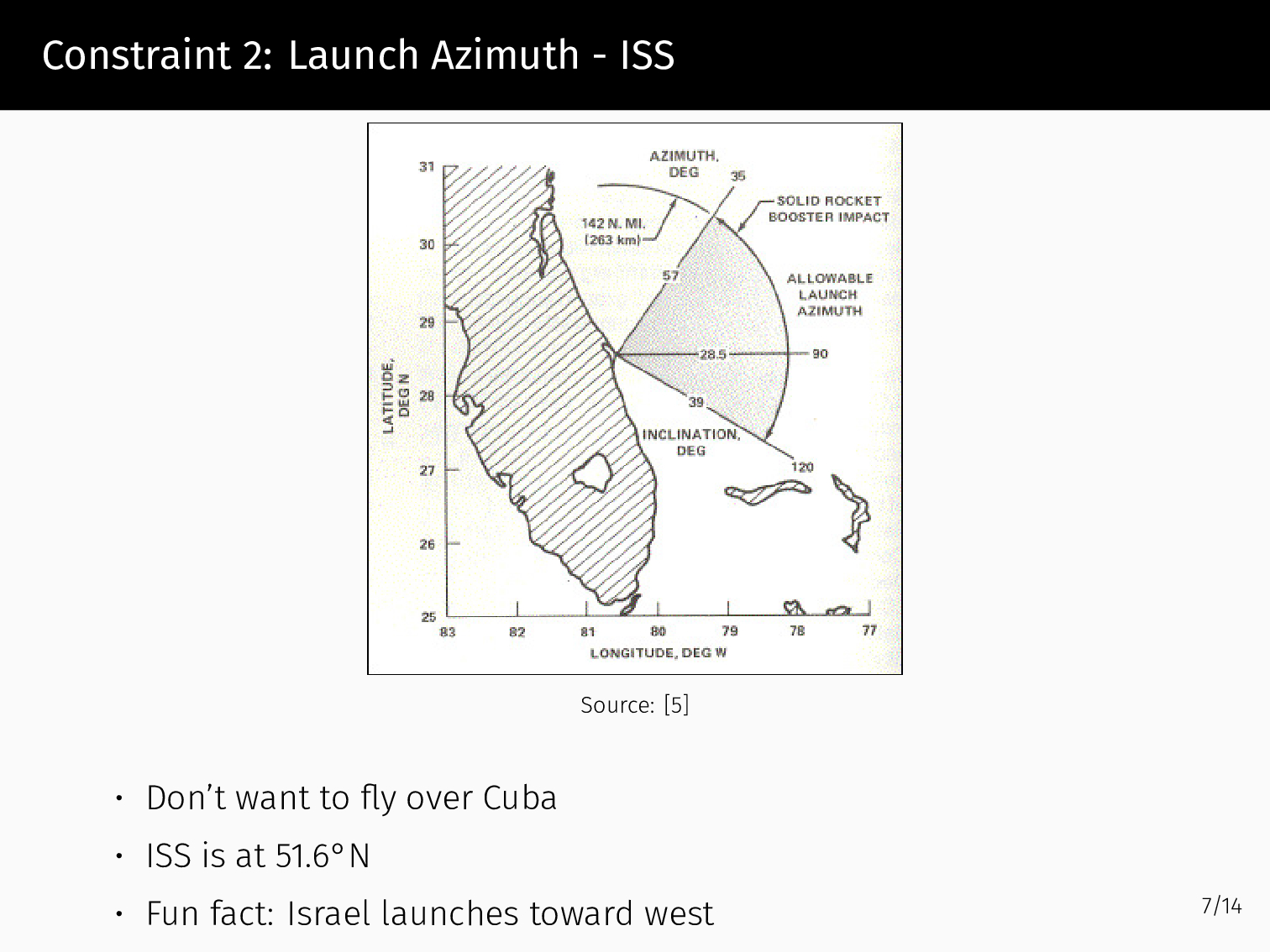 This shows the allowed launch azimuths when launching from the Kennedy Space Center. When launching due east, a payload would end up in a 28 degrees inclination (the inclination of the launch site). Launching slightly north (on the ascending node) or south (on the descending node) increases this inclination, to up to 57 or 39, respectively. The north and south limits are set by inhabited areas and (during the cold war) unfriendly territories (you certainly don’t want the USSR to think you are bombing Cuba, its ally).

Since the ISS is at 51 degrees, a rocket can only launch north (on the ascending node), limiting the available windows to one each day.

Fun fact: due to some (obvious) constraints on the east, Israel has to launch to the west, with a heavy penalty on the payload capability. 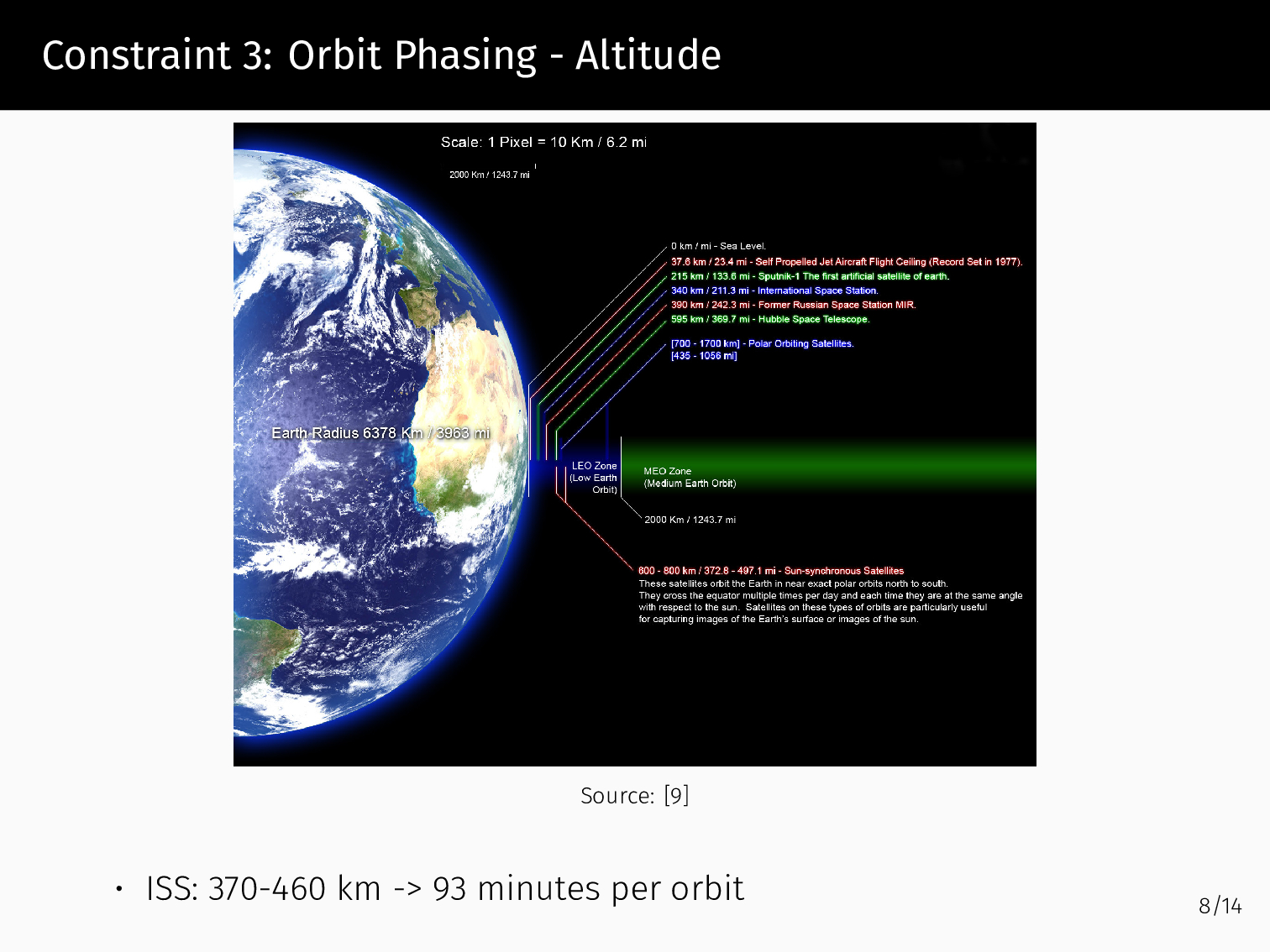 We have just seen that the ISS is orbiting at an 51 degrees inclination. Let’s now look at its altitude.

Most satellites are in Low Earth Orbit, between 100 km (generally accepted atmosphere-space limit) and 2000 km, depicted in blue. The ISS is at 340 km. At this altitude, the ISS makes one orbit every 93 mn. Sharp readers will calculate that it corresponds to around 15 orbits per day.

Let’s see on the next slide how this works. 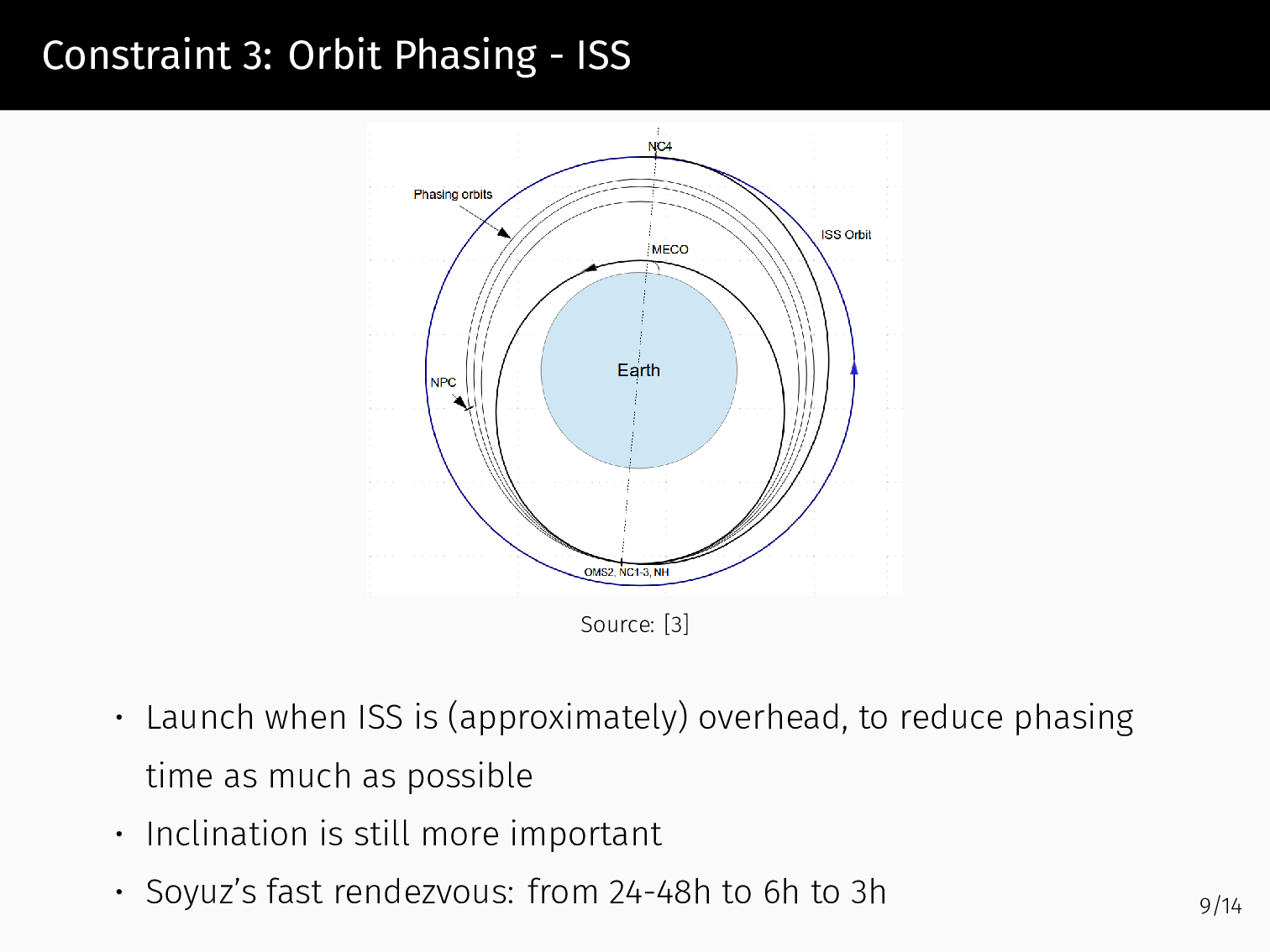 The ISS is on the higher, blue orbit. The spacecraft launches initially in a lower orbit, in black. The spacecraft will move faster than the ISS (because the path is shorter and because it moves faster), and will therefore catch up. The spacecraft then makes a series of burns to gradually increase its altitude (following the orbits shown in gray), until it reaches the ISS.

To optimize the phasing duration, the spacecraft will launch when the ISS is roughly overhead. Inclination is still more important, because phasing is free from a fuel point of view (it only costs time).

Usual phasing duration for Soyuz used to be 24-48 hours, but this was reduced to 6h. Some studies and (uncrewed) tests are made to reduce it to 3h. 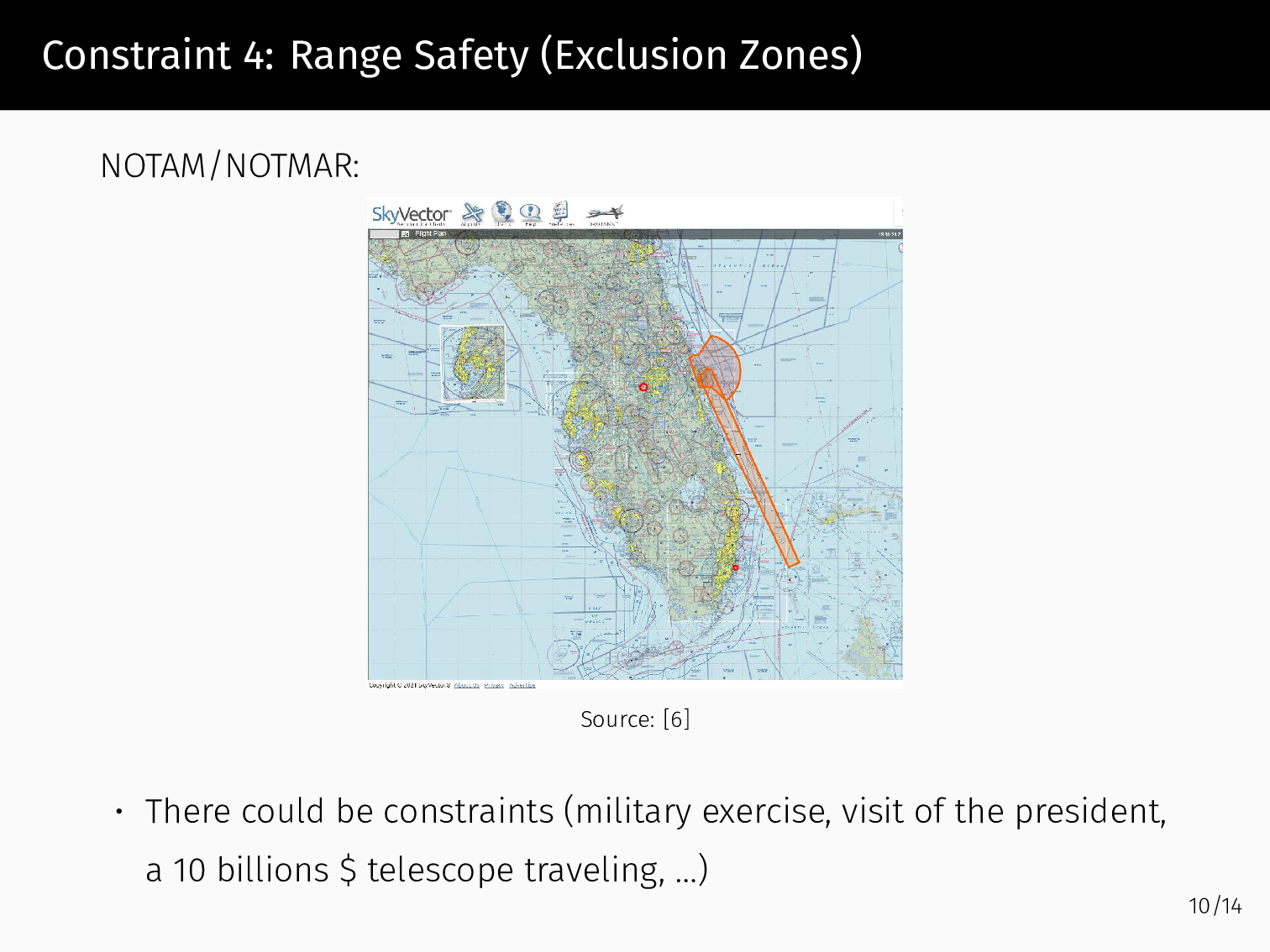 The fourth constraint to take into account is the range safety. I already touched this one with the launch azimuth, but I focused on lands and inhabited areas. This is about air and sea.

When a rocket launches, the airspace and seaspace are closed to avoid any collision risk. This is done by issuing notices to air men (NOTAM) and mariners (NOTMAR).

This slide shows the NOTAMs of a Falcon 9 launch a few months ago. You can see one zone for the trajectory of the first stage (landing on the barge) and one zone for the trajectory of the second stage. The airspace is closed because the rocket obviously crosses the airspace, but the seaspace is closed too because debris might fall in the sea in case of an issue.

This is a constraint because setting up these exclusion zones might not always be possible. 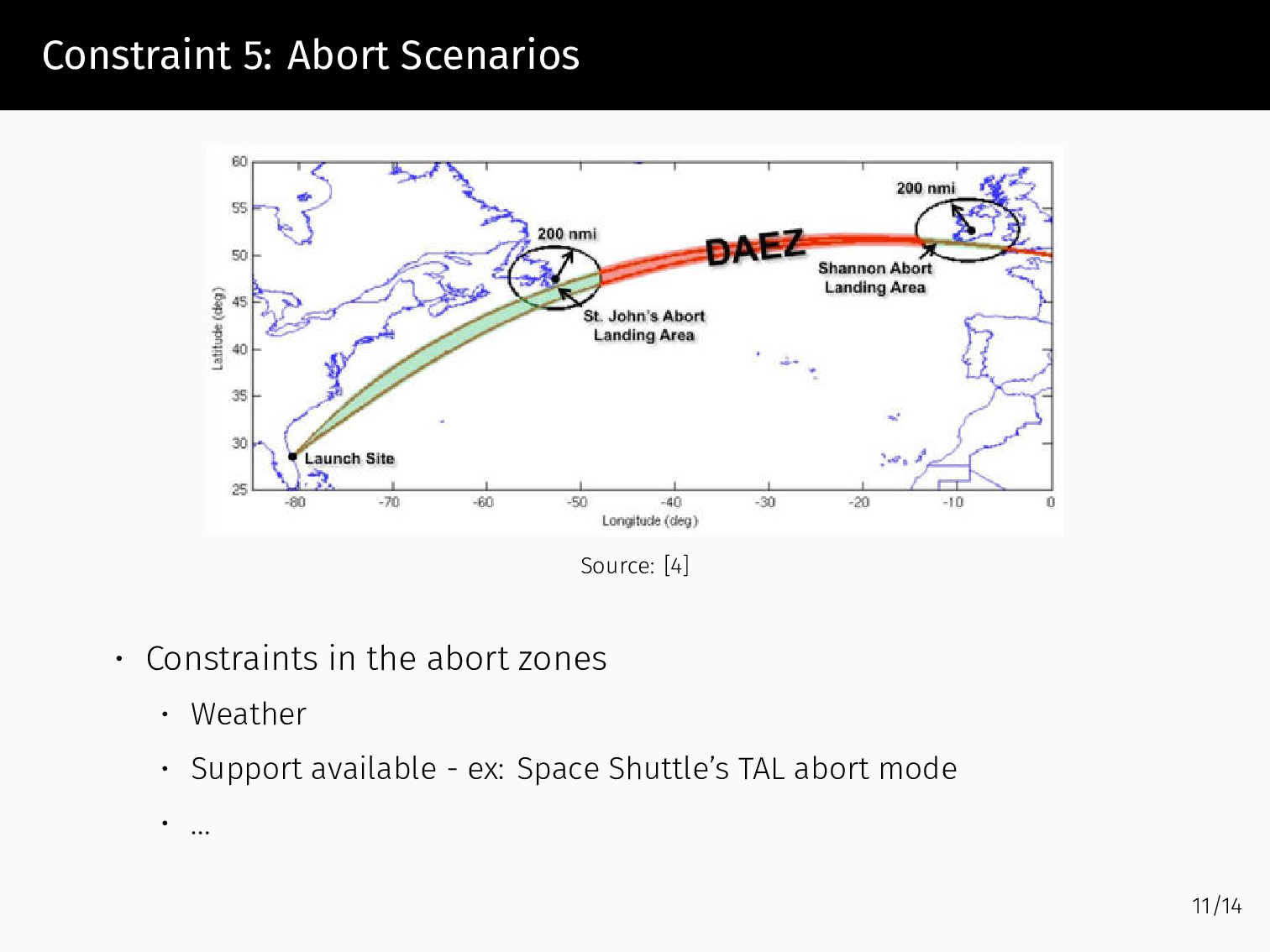 This constraint is my preferred: if I told you that weather in Ireland could impact a launch from Florida, you would have a hard time believing me. But it is true. Let me explain.

The Space Shuttle had a very complex and interesting abort mode: the Transoceanic Abort Landing (TAL). Before each launch, NASA choose 2 airbases in Europe (out of 4) to serve as fallback options in case of issues too late in the launch to come back to mainland USA, but still to early to allow the Shuttle to reach orbit. One such base was the Istres military base in the south east of France. NASA would flew several (!) aircrafts with support material and personnel to help take care of the Shuttle in the case of an abort. 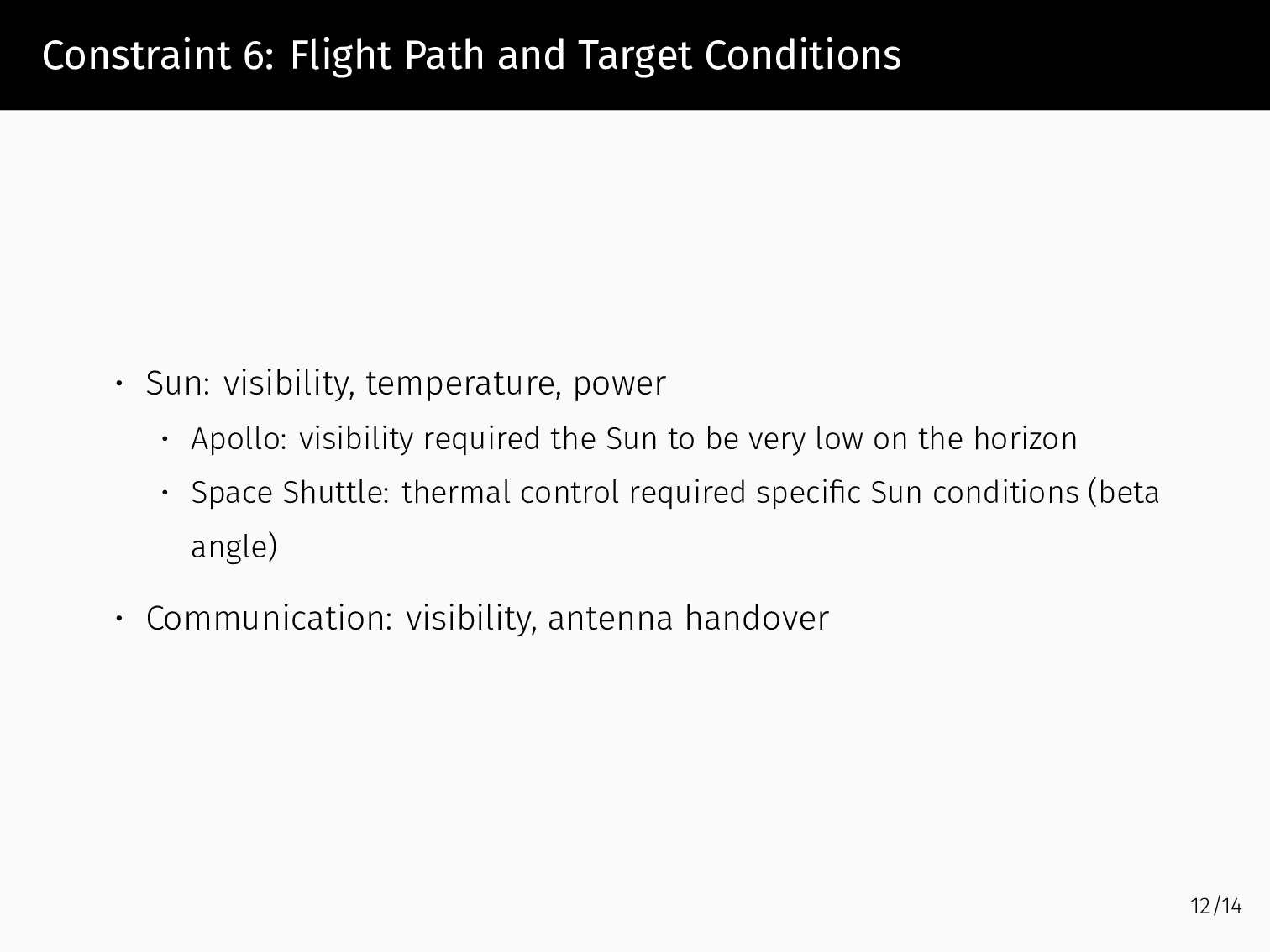 I mentioned the abort scenarios, but even when everything goes as planned, there are still a lot of constraints along the flight path.

The sun is a huge constraint, because of all the effects it can have: light, heat, and power generation. Spacecrafts and mission planning in the past were heavily dependent on it. This is obviously still true today, due to the high usage of solar panels.

Communication can also be an issue: you don’t want a critical operation requiring perfect communication to happen right when your antenna goes out of visibility or needs to switch its relay or ground station. 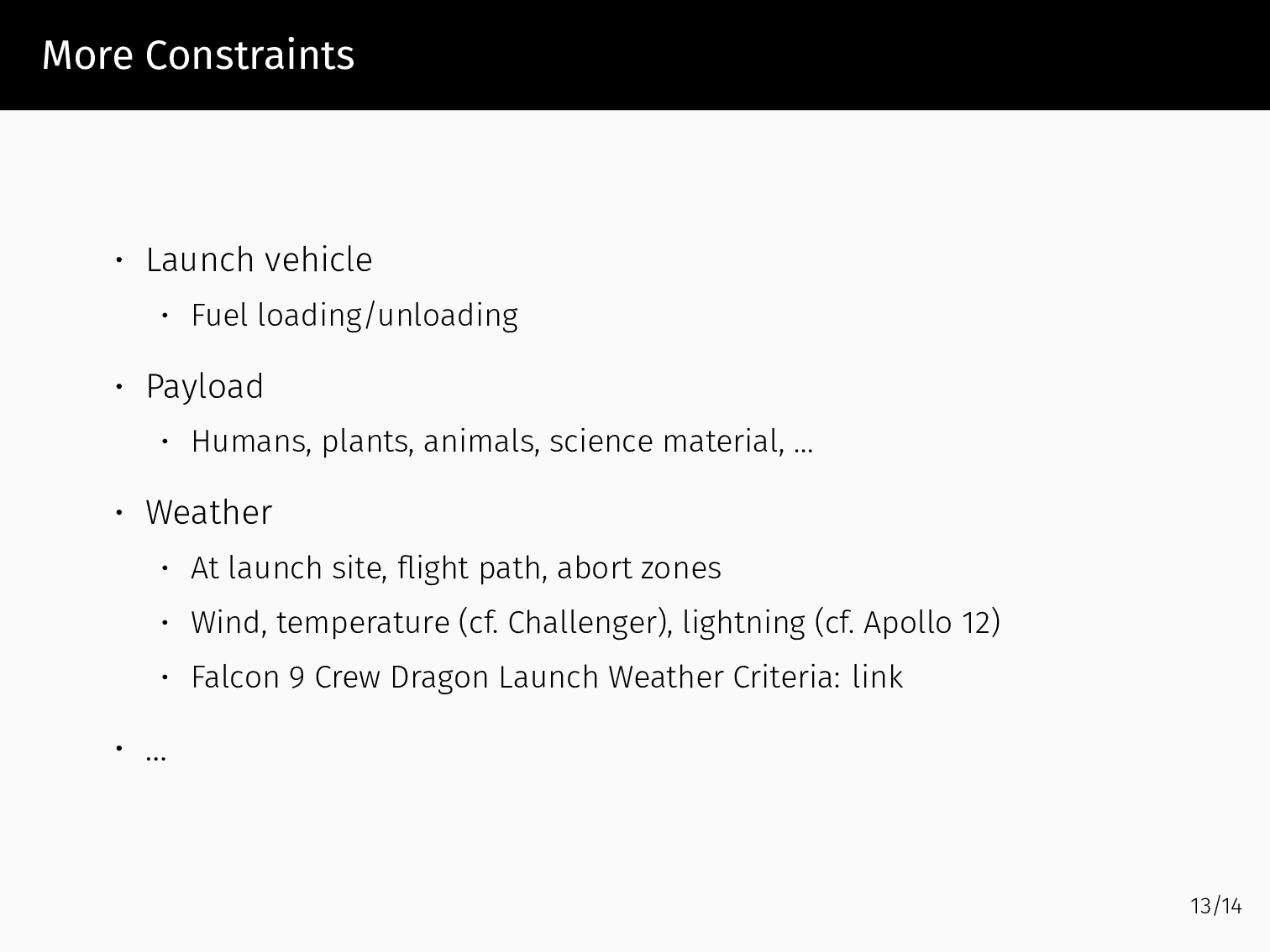 Constraints are plentiful and this was just a few of them. You also need to watch many other things: 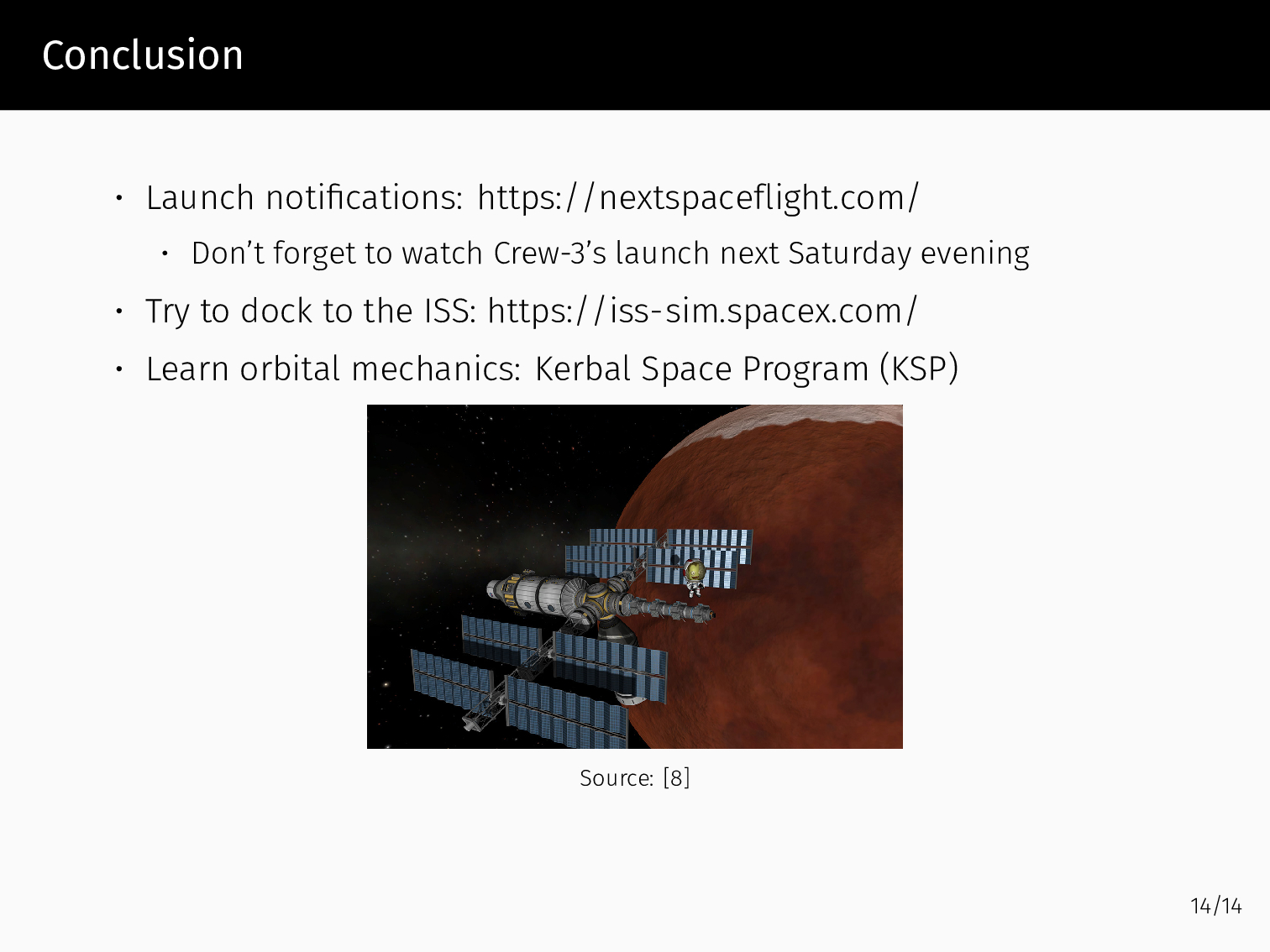 To finish, here a few links to learn more. The source of the slides are available on my Github.